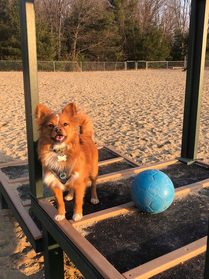 Meet Moose! Born February 1, 2017, Moose quickly became the mascot of Pack of Moose Pet Services! He is a Pomeranian/Pug mix and he enjoys coming to as many meet and greets and walks as possible. Moose loves all other animals and has been socialized at an early age with all different types of animals. His favorite past times are being known as the 15lb floof of terror and pretending he's the biggest, baddest dog on the block! Most people underestimate his size, but he's Becca's Kurgo Running Team 5k partner. 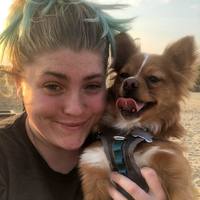 Meet Becca - our owner and founder, also the pack leader of the Orange location! Becca has been compassionate towards animals for her entire life. There has always been something about being with animals that clicked, and there aren't many animals that dislike Becca and vice versa. Growing up with cats and riding horses, and always wanting a dog, Becca chose to care for the neighborhood pets instead. Upon her 20th birthday, she ended up being the proud owner of two ferrets, Raccoon and Whiteout. A few months later, Lily came into her life, which is when Becca decided to take her life in a new direction - pet care. It has been a dream to start her own pet sitting company and now it's finally coming true. Becca is also a Fear Free Certified professional. 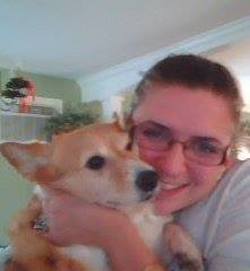 Meet Danielle - the pack leader of the Newburyport location! She and Becca met through North Shore Community College, in the Animal Science major, on the first day of classes in 2010. They instantly became inseparable from that moment. Danielle joined the pack on a last minute scheduling for a Thanksgiving visit. She has taken charge of the Newburyport location since. Between working at dog grooming salons and vet clinics, Danielle shares the same passion for animals as the rest of us.

Meet Kayla and Myloh - the newest member's of our pack! Kayla and Becca met due to the fact that Moose and Myloh are biological brothers but from two different litters - Myloh being the older-more princess-like brother. Myloh is learning to socialize with the pack better and he's loving it all so far. While Kayla and Myloh may not spend every day out on the road with us, Myloh does occasionally take trips with us.